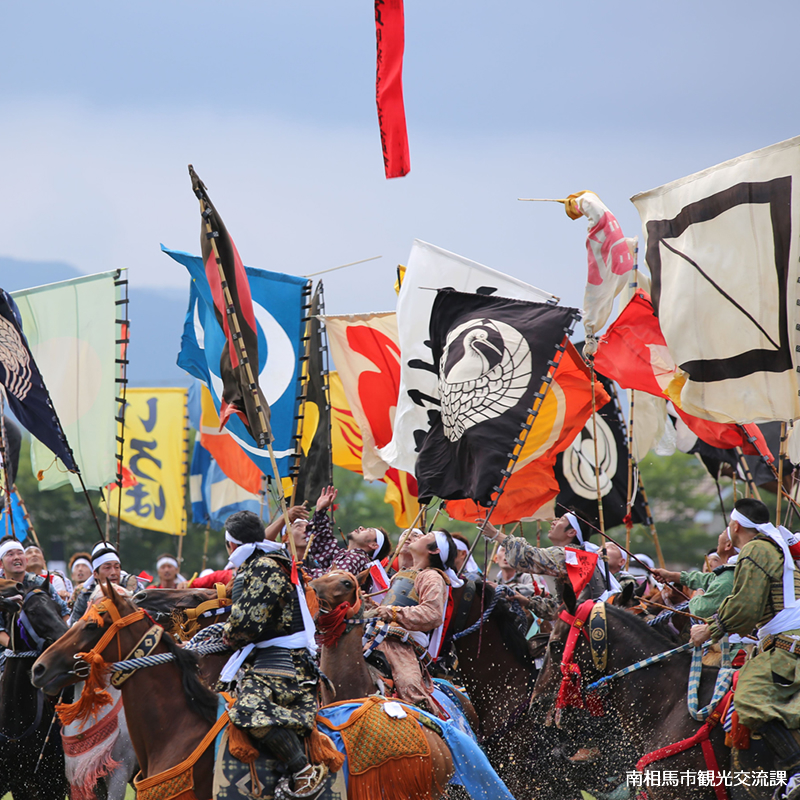 Soma-Nomaoi Festival
Soma-Nomaoi Festival has continued for over 1,000 years, originating from military training consisting of capturing horses released into the fields by Taira no Masakando (the father of Soma), and the subsequent dedication of the captured horses to the gods. In 1978 it was designated as an Intangible Folk Property of Japan.

The festival is divided into three days. On Saturday a departing ceremony is held at Soma Nakamura Shrine, Soma Ohta Shrine, and Soma Odaka Shrine. Among the harsh atmosphere, a procession of cavalry warriors is sent to the Hibarigahara festival grounds. At Hibarigahara festival grounds, where the procession arrives, the calvalry warriors dress in white headbands, nobakama pants, and jinbaori battle surcoats, riding one thousand meters around the grounds for an evening ride, the area becoming enraptured in warm energy.

For the main festival on Sunday, a “Armored Horse Racing” and “Godly Flag Warfare” are held on the Hibarigahara festival grounds, with the white headband wearing cavalry warriors sprinting around with their ancestral flags. The “Goldly Flag Warfare” event is the highight. 40 ancestral flags are held up for 20 rounds, and hundreds of cavalry warriors race towards their corresponding flag. A scene unfolds that resembles imagery from the Sengoku era as they scramble in competition. The figure of the winning cavalry warrior with his ancestral flag rushing up the zig zagging hills of Honjinyama is also an incredible sight.
[Location]
Minamisoma City, Fukushima Prefecture
[Festival Dates]
Last Saturday, Sunday, and Monday on July *Main festival is on Sunday.
[Official Homepage]
http://soma-nomaoi.jp/ 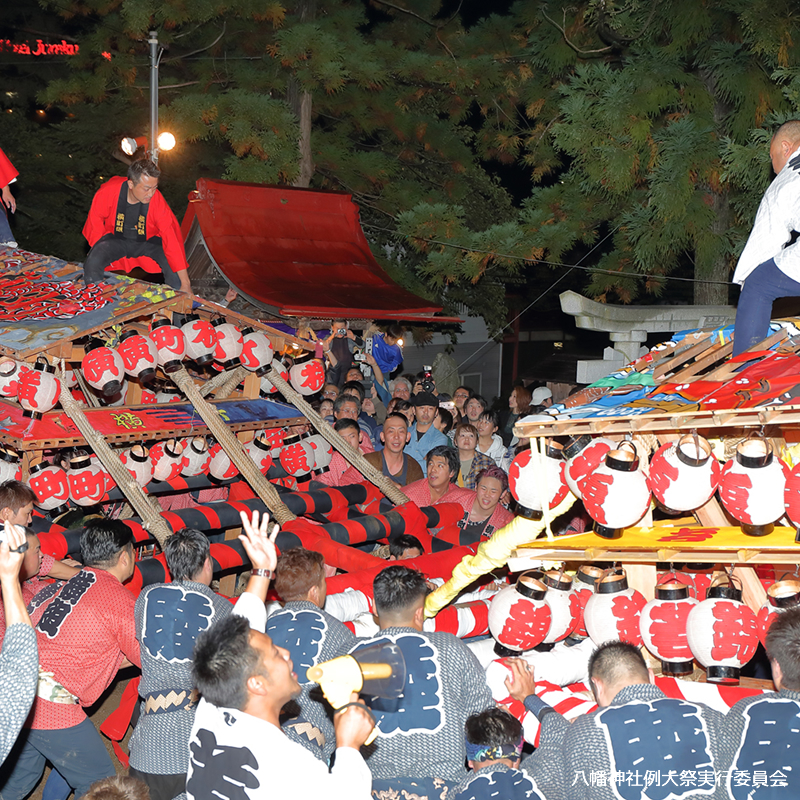 Iizaka Hachiman Shrine Festival: Iizaka Kenka Festival
Known as one of the three top Kenka festivals in Japan, Izaki Kenka Festival has over 300 years of tradition. The origin of the taiko drums are said to come from the flow of Kyoto Gion music. Mikoshi shrines made by the locals are led by stalls elegantly decorated from the eight towns in the region. On the morning of the second day of this three-day festival, the procession goes through Iizaki Town. The total distance of the procession is approximately 15 kilometers.

The highlight of the festival is when it enters the temple in the evening. Along with the mikoshi that have finished their procession, and the stalls decorated during the daytime, portable taiko shrines from six towns (Uwamachi, Takinokawa, Wakanishiki, Tachitsuna, Yokomachi, and Saihana) head to Yahata Shrine, guided by young people. The contrast between the colorful lantern-lit night stalls boldly advancing, and the gorgeous day time stalls steadily moving forward is spectacular. The festival reaches its climax as the stalls violently collide as they struggle to enter the torii gates of the shrine. It’s said that this collision ritual started from trying to prevent two stalls from colliding together in 1933. The shrine gates are believed to have contracted from loneliness after the festival ended. The scene is truly incredible, with the drums echoing through town, beating to the momentum of the stalls, as violently shaking lamps turn the sky red.
[Location]
Fukushima City, Fukushima Prefecture
[Festival Dates]
Three Days Around First Saturday of October
[Official Homepage]
http://hachimanjinja.info/
<  We return to Display objects introduction