The Ogatsu stone picture looks forward to the recovery from the Great East Japan Earthquake
Renowned for its beautiful sheen, the Black Ogatsu slate stone, is the specialty product of Ogatsu district in Ishinomaki City.As well as a prized raw material of the ink stone used for calligraphy, it is also used for the roof tiles of Tokyo Station's Marunouchi Building because of its excellent resistance to long-term deterioration.The stone picture artist, Genshojitsu Saito, devised this work as a symbol of reconstruction and to express hope for the future (the work was inspired by his original drawing and he supervised its creation).It is interesting to compare this with his other stone picture, the "Shining", exhibited at Tokyo Station. (based on his drawing and created under his supervision)Drew a hope for the reconstruction, Ogatsu stone picture Ogatsu stone of the black shiny beautiful Ishinomaki Ogatsu district famous.Not only as a raw material of the ink stone, it has also been used in the roofing material of the Tokyo Station Marunouchi station building because of its high resistance to aging and the like.This work is, the original of the original supervision of Genshojitsu Saito fruit of Ogatsu stone picture writer, symbol of reconstruction depicting the hope for the future.It said is Ogatsu stone picture "shining" of Tokyo Station original supervision, is also recommended to compare. 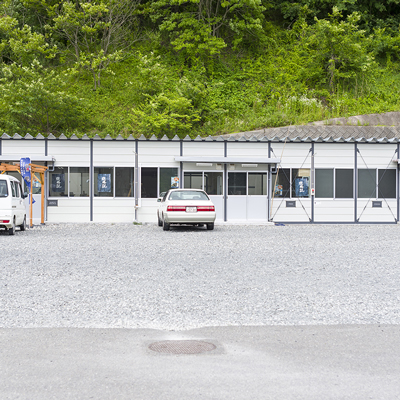