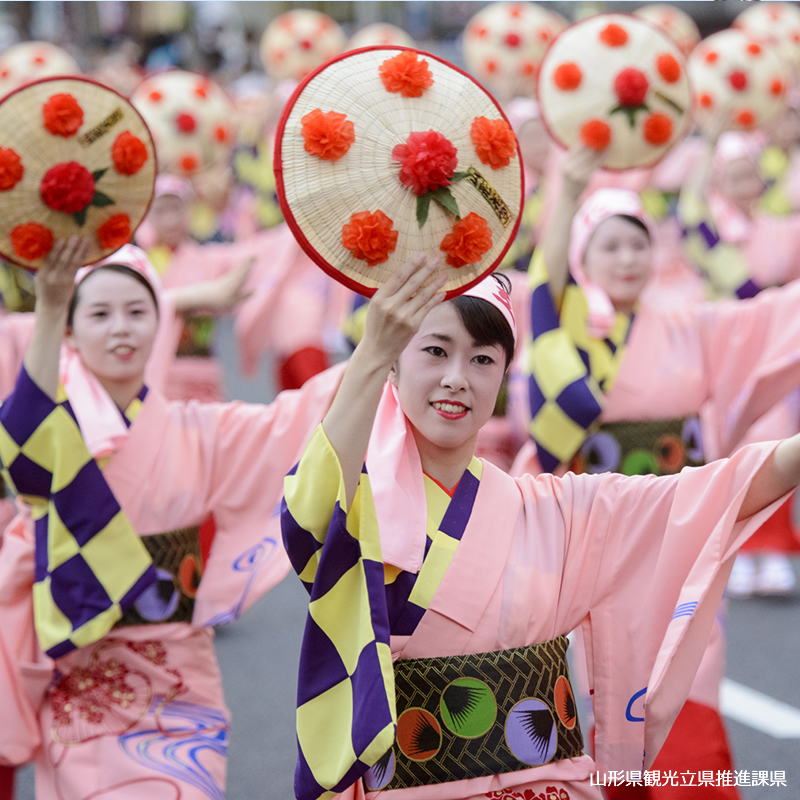 The parade is held on Yamagata City’s main thoroughfare, and starts with the Hanagasa dance group leading the front, while dancers from local companies and organizations boldly chant “yasho, makasho,” as the tones of the Hanagasa taiko drums resonate. All the while the dancers, dressed in charming costumes, hold the Hanagasa flower hats in their hands while performing the dance with overwhelming dynamism. The method of dancing varies from region to region, and nowadays they choose from orthodox dancing techniques such as the “Kunpu Mogamigawa” female dance and the “Zao Gyoko” male dance. A variety of dances fill the grounds with dynamic hat twirling and uniquely creative dancing from the Obanazawa region in Yamagata Prefecture, said to be the birthplace of the Hanagasa dance. At the tail end of a parade is an area to join in, so you can enjoy participating in addition to watching.
[Location]
Yamagata City, Yamagata Prefecture
[Festival Dates]
August 5-7
[Official Homepage]
http://www.hanagasa.jp/ 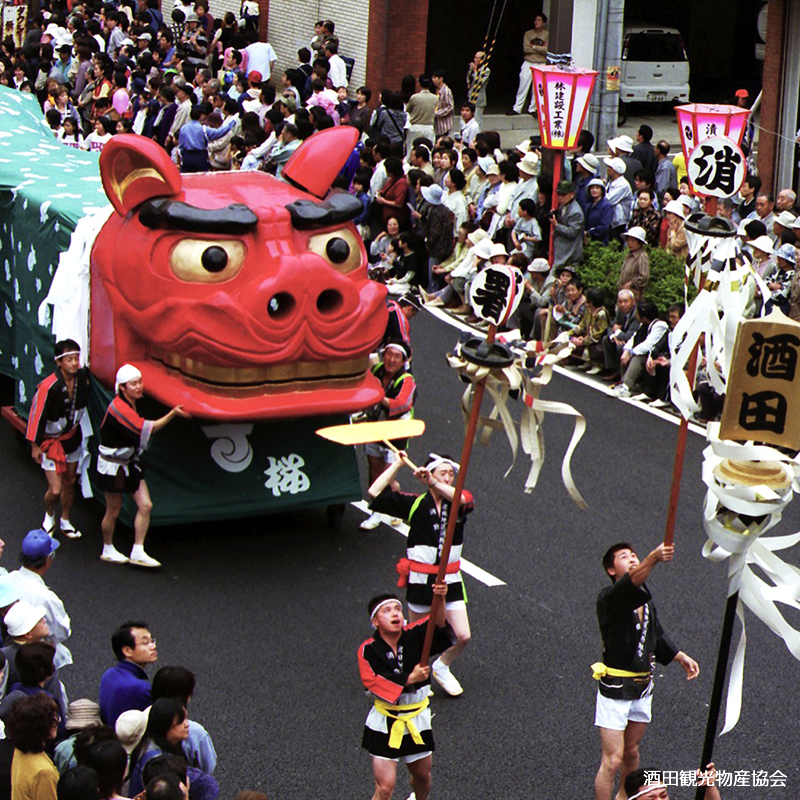 Sakata Festival
The Sakata Festival is known as one of the three largest festivals in Shonai, alongside Tsuruoka City’s Tsuruoka Tenjin Festival and the Oyama Dog Festival. The present Sakata Festival has been held since 1979 to commemorate the reconstruction after the great Sakata fire. It continues from the Sanno Festival, which has been regularly held at Kamihie Shrine (known as the protector of Sakata) and Shimohie Shrine since 1609.

The festival is divided over three days into an evening festival, main festival, and ending festival. During this period, over 300 open stalls are lined up from Sakata’s main thoroughfare to Hiyoriyama Park. You can really see the excitement. The best feature of the festival is the great lion, a symbol believed to prevent disasters and diseases. For the main festival on the 20th, a procession of approximately 50 floats, including lion floats, decorated “umbrella hoko” floats move in a procession, featuring the main giant lion float, which has a two-meter long head and 10-meter-long torso. During the float procession, kids climb into the giant lion’s mouth, with the popular pose resembling being eaten up by a lion. It’s said that letting the lion eat you will result in a strong upbringing, the line in front of the giant lion can get very long. In addition, in 2008 the “Tate Yamaboko” tower was restored after over 100 years and is now known as the new symbol of the Sakata Festival.
[Location]
Sakata City, Yamagata Prefecture
[Festival Dates]
May 19-21
[Official Homepage]
http://www.sakata-kankou.com/event/80?season=spring
<  We return to Display objects introduction